Todd Greene and Dave duCille are in the middle of an epic 1,500 mile bike ride from New York City to Joplin, Missouri.  Todd and Dave are peddling half-way across the country to commemorate the one-year anniversary of Joplin’s horrific May 22, 2011 tornado and to raise enough money for storm shelters for 20 Joplin families. 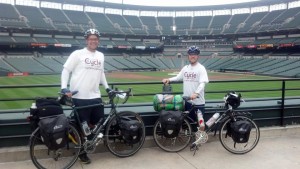 A celebration and fundraising event will take place between 4:00 pm and 6:00 pm on May 18th at 2330 Range Line Road in Joplin in front of Orange Leaf.

Hurt Trucker is proud to call Todd one of its own.  Todd is founder and president of internet marketing company Ad-Alt.  Todd and Ad-Alt helped Hurt Trucker develop our website, Twitter feed, and Facebook book page (among other things) so that we can communicate with truckers on-line.  Todd and his expertise have allowed Hurt Trucker to connect with thousands of truckers all over the country.  Some of you may remember Todd from the First Annual Truck Driver Social Media Conference in Tunica, Mississippi.

Todd was born and raised in Joplin, Missouri.  He graduated from Joplin High School, attended the University of Missouri where he graduated with a degree in marketing, and then moved to New York City where he honed his internet marketing skills for over 10 years.

When a tornado hit his hometown, Todd heard a call to action.  While still living in New York City, Todd co-founded Joplin Expats.  Joplin Expats is a group of former Joplinites who have organized their efforts to raise money and support the rebuilding of Joplin.  The group has raised thousands of dollars and supported many important initiatives in Joplin.  Todd has since moved back to Joplin and has devoted hundreds of hours to the rebuilding effort.

Todd’s hard work and creativity in support of efforts to rebuild Joplin have been truly inspiring.  We encourage anyone interested in rebuilding Joplin to consider donating to Cycle for Joplin.  You can donate by visiting the Cycle for Joplin website, or you can join the celebration and donate on May 18th in Joplin when Todd and Dave ride into town.

And, of course, if you see Todd and Dave on the road, give them a honk and a word of encouragement!

And so are trucker attorneys. Want to know the secret? Read or print our free guide now.